RUSSIA – UKRAINE CONFLICT: THE GLOBAL COCOA MARKET AND FACTORS TO WATCH OUT FOR

The Russian Federation and Ukraine play an integral part in the global economy as both are major exporters of commodities (crude oil, natural gas, different metal ores, etc.) as well as being important actors within the global agricultural sector (wheat, fertilizers, edible oil etc). The halt or even a reduction in the exports of one of these commodities will fuel inflation on a global scale which will add up to the inflation resulting from the supply chain disruptions still caused by the COVID-19 pandemic. Nevertheless, at this junction, it is difficult to evaluate the economic and financial impact of the conflict. It is unknown how long it will last; when the current sanctions will be lifted; and whether other sanctions will be imposed. These tragic events and their global economic spill-over effects will also have an impact on the world cocoa market.

RISK TO COCOA DEMAND
Major cocoa processors and chocolate brands have operations in these countries. In the midst of this military drama, it is difficult to envisage the impact on the operation of facilities, potential damage and of course safety of personnel of these companies. The importation of cocoa beans and cocoa semi-finished products to Ukraine (40,000 tonnes in cocoa beans equivalent in 2020/21) and to the Russian Federation (165,000 tonnes in cocoa beans equivalent) are expected to decline in the rest of 2021/22 season for a number of reasons. In Ukraine, the conflict is affecting the safety of any economic activity. In addition to this, the disruption of the power supply and various logistical problems make any manufacturing process even more challenging. In the Russian Federation, the depreciation of the rouble on the one hand, and the sanctions applied to some part of the Russian banking system on the other hand could reduce the demand for cocoa, as the payment of import contracts would be difficult and create big uncertainties for cocoa processors & chocolate manufacturing companies.

RISK TO COCOA PRODUCTION
The significance of fertilizer as an essential input for cocoa production cannot be ruled out. Most cocoa trees in producing countries are old and the soil nutrients for many cocoa farms are depleted so the dependency on fertilizer for crop development is a requirement. However, in recent years, fertilizer prices have soared and likely to further increase due to the ongoing Russia -Ukraine conflict. The Russian Federation is a major global supplier of fertilizers.  Indeed, Russia is a primary producer of the main fertilizer nutrients – nitrogen, phosphate and potassium. Trade disruption in Russia could affect global fertilizer availability and consequently global agriculture including cocoa production. According to fertilizer trade statistics published by IHS Markit, several cocoa producers import fertilizer from Russia and Belarus. Côte d’Ivoire and Ghana which represent together more than 60% of the global cocoa production import a large share of nitrogenous and potassium fertilizers from the Russian Federation and Belarus. Fertilizer trade will be affected as sanctions imposed on the Russian Federation and Belarus such as banking restrictions would hamper the payment of fertilizer sales. Many countries are prohibiting ships from Russia to enter or pass through their territories. Freight charges are also rising. Thus, should this situation persist, cocoa smallholders who are already struggling with high prices of fertilizers will be unable to afford them. In addition, the shortage of fertilizers on cocoa farms will no doubt affect the quantity, quality and size of cocoa beans. There is the likelihood that the cost of cocoa production for the next cocoa season will increase and consequently affect prices. 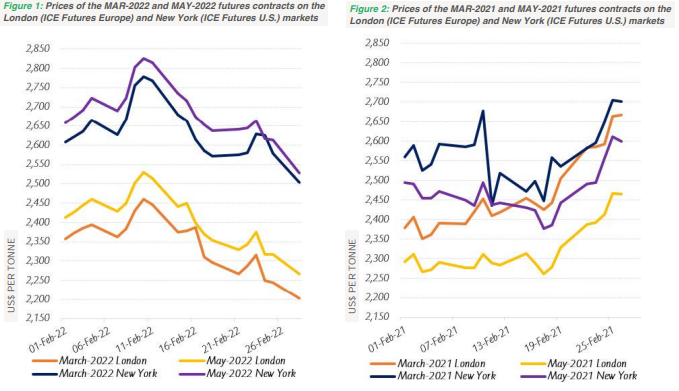