This review of the cocoa market situation provides a brief on the September 2020 (SEP-20) and December 2020 (DEC-20) futures contracts prices listed on ICE Futures Europe (London) and ICE Futures U.S. (New York) during the month of August 2020. It aims to highlight key insights on expected market developments and the effect of the exchange rate on the US-denominated prices of the said contracts. 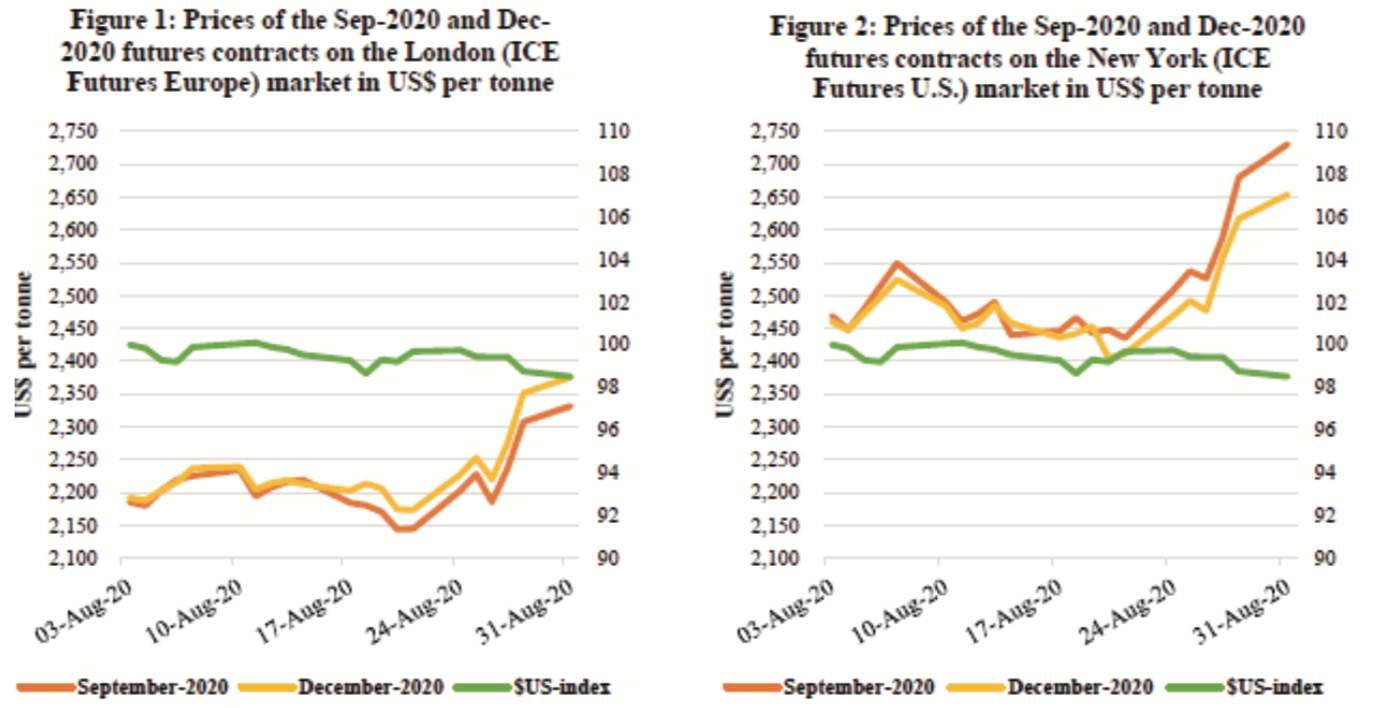 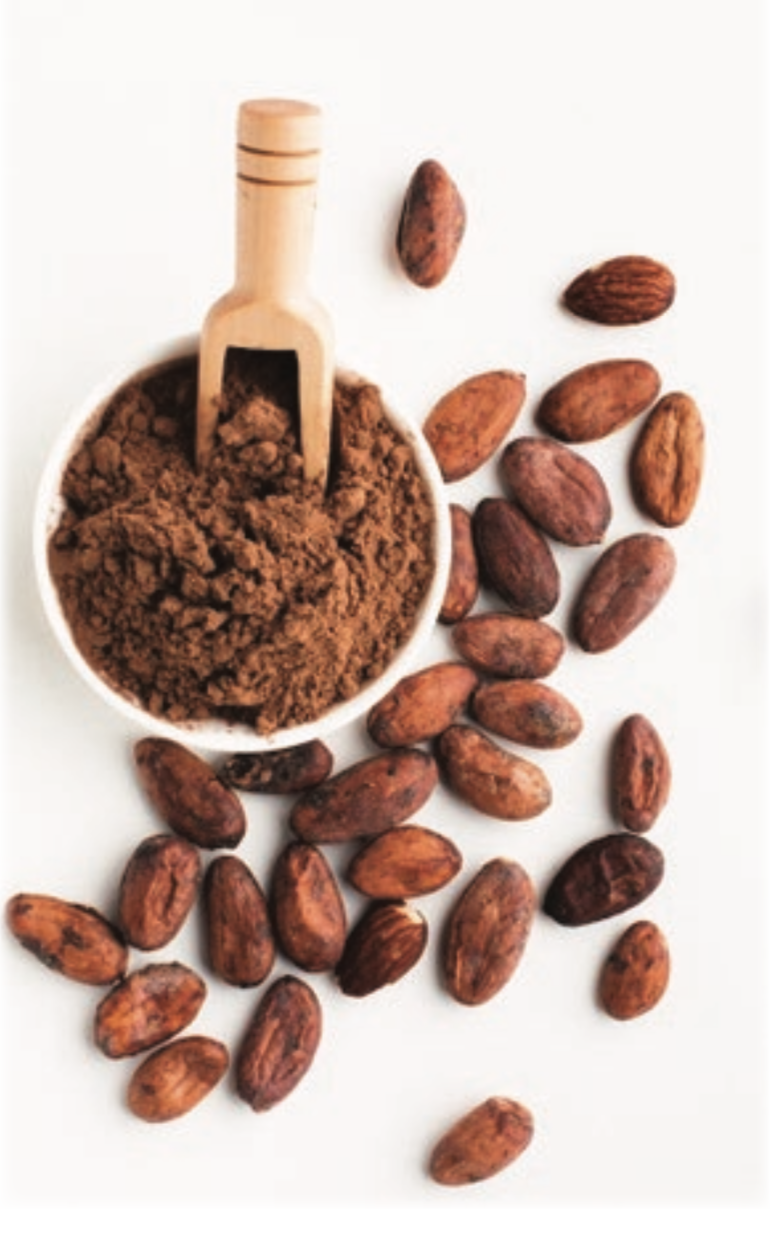 The London market was in contango during July and remained in this price configuration in August but in a lesser form. As shown in Figure 1 the front month cocoa futures contract (SEP 20) priced with an average discount of US$ 19 per tonne over the DEC 20 futures contract. Similar to July, the New York market remained in backwardation but in a more narrowed form (Figure 2). Compared to the DEC 20 futures contract, the SEP 20 contract traded with an average premium of US$ 23 per tonne. Furthermore, compared to the start of the month, prices on both markets rallied by the end of the month. Prices soared by 7% from US$ 2,185 to US$ 2,331 per tonne in London and by 11% from US$ 2,469 to US$ 2,731 per tonne in New York.

For the first three weeks of August the SEP 20 futures contract prices remained in a range on both markets. While adverse meteorological conditions observed in the cocoa regions in West Africa resulted in a bullish stance the coronavirus (COVID-19) pandemic which is stifling demand led to bearish prices. During this period, the London front month contract prices moved between US$ 2,143 and US$ 2,234 per tonne and in New York prices oscillated between US$ 2,435 and US$ 2,549 per tonne. Moving on to the last trading week of the month under review cocoa prices rallied as recurrent below average rainfalls which could curb production levels for the upcoming main crop were recorded in the main cocoa areas of West Africa.

As a result, the SEP 20 futures contract prices stretched to an almost ten week high at US$ 2,331 per tonne in London whilst in New York prices climbed to a six month high at US$ 2,731 per tonne.

Movements of cocoa futures and cocoa butter prices are positively correlated whereas the inverse occurs with cocoa powder prices. Figure 3 shows that compared with the average prices recorded at the start of the 2019/20 cocoa year, prices for cocoa butter were down during August in both Europe and the United States. Indeed, prices for cocoa butter shrank by 8% from US$ 6,331 to US$ 5,844 per tonne in the United States, while in Europe they plunged by 7% moving from US$ 6,260 to US$ 5,792 per tonne.

Furthermore, compared to their average values recorded at the start of the 2019/20 cocoa year, the front month cocoa futures contract prices contracted by 9% from US$ 2,423 to US$ 2,209 in London at the end of August 2020. Conversely in New York, prices of the first position cocoa contract improved by 2% from US$ 2,467 to US$ 2,506 per tonne over the same period. 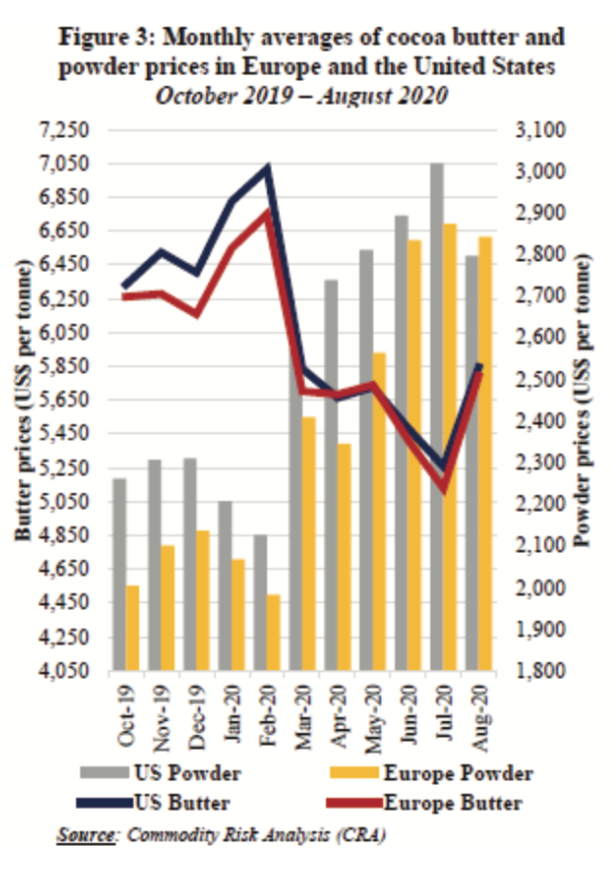